This is laughable. Have we lost connection to language and meaning in some way? Because a state university has just supported a training for their RA’s called Stop white people 2K16! And somehow they think because they put an explanation as to what the course is about, it should not be offensive to white people. Well, excuse my language, but duh. Would stop black people be offensive? Stop mexican people? Stop asian people? Hmmm. I think so. Find a better name. Like diversity training. Keep it simple.

The Vice president of student affairs of this college, stated “its purpose, as conceived, was to facilitate a discussion among the RAs that would improve their ability to handle conflicts among residents around issues of diversity.” I understand that, you do not see anything wrong with the training itself, but the name out of context is alarming. The next day after he said this, he seemed to have revoked his statement in a way, understanding the name is offensive. After the RA’s involved were targeted by those who are upset by their choice of words for training about cultural diversity, he had to in a way, agree with the majority. Or perhaps more outrage towards these three RA’s would have continued. But should they not endure public humiliation for offending people all across the country? Better yet, why would an administration support this initially in the first place? This shouldn’t even been on the news. If someone with good judgment had seen this training before it was published, it would have never been published.

Why should those in administrative positions be allowed to offend the country? It is a publicly funded institution which further makes this an outrage. No person in a position of power, should take it upon themselves to define racism as not offensive in order to defend their staff. You have the first and foremost duty to uphold a standard of excellence. No where in your job description does it say you most defend staff who make poor  decisions. This shows me this university does not have the right people in administrative positions.

The VP of Student Affairs at this certain university stated, “the mistake made by staff who let it go to print was a failure to consider what impression the program title would create if it circulated beyond those familiar with the hashtag, as it in fact did. We’ll make sure all of our staff learn from the experience.”

He also goes on to admit there was an error in judgment. I find this confession a confirmation of what I have suspecting all along; lack of leadership. The lack of compassion at first towards whites who may be offended also is upsetting. I hope people who can make decisions properly are given an opportunity at this university to teach rather than those who display the most unworthy influential characteristics. 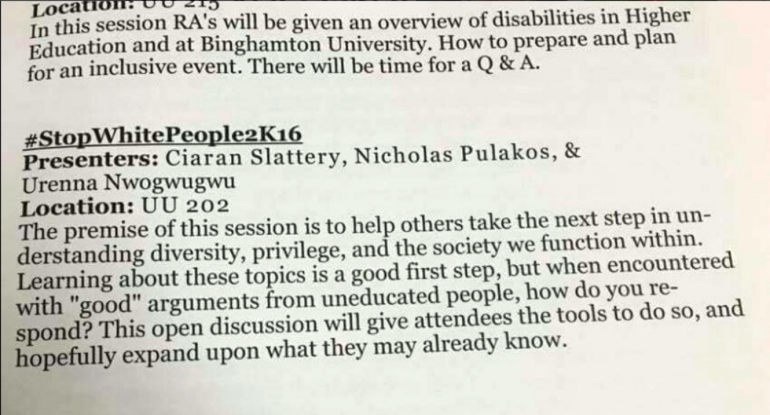