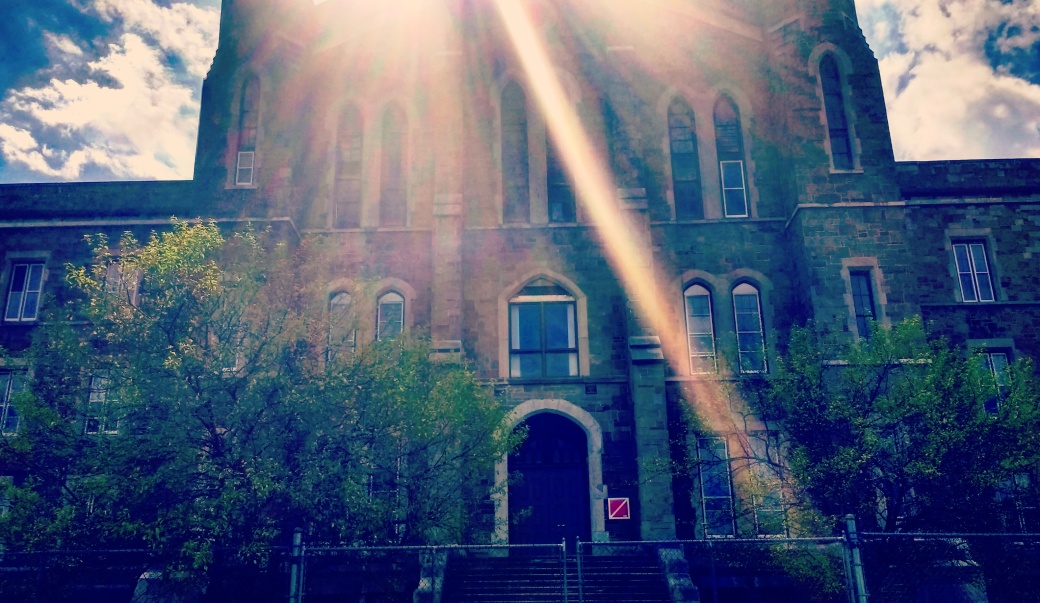 Most people would find this place eerie now. But in the past, it had a purpose, a mission, and was alive with patients, doctors, and nurses. It was the first asylum to treat those with alcoholism. It also challenged traditional perspectives of the disease in a way.. It encompassed traditional and moral elements into it’s treatment. It was groundbreaking for its time. Now it sits deteriorating, but miraculously still holds its beauty in my eyes. Personally, I felt a euphoria being here.  Almost as if it didn’t matter no one was there at all, because the place still felt very much alive to me.

Doctor Joseph Edward Turner was at the heart of it all. He had a vision that alcoholism was a mental illness and intended to be a pioneer in the field. He drew a heavy influence from Dorothea Dix in which I must pray respect to pioneering the pathway for Turner. Dorothea reformed the way the mentally ill were treated and her accomplishments were extraordinary. She was determined to change how the mentally ill were grouped in facilities with criminals. She knew it endangered their welfare and felt the government has a moral duty to protect them. She was an advocate for the mentally ill, winning cases and successfully influencing hospitals to be built all over the country. Her influence reached overseas as well, into Europe.  In the Civil war, she eventually was known as dragon dix for being reluctant to follow orders. She was resourceful, finding ways to help those the government neglected, even her fellow nurses. She retired at 82, which is quite impressive as well. No wonder Joseph Turner was so inspired.

Joseph Edward Turner studied alcoholism specifically as a student and grew an interest. He recognized certain groups of people, religious especially, did not accept alcoholism as a mental illness. He traveled abroad, a suggestion by Doctors Francis and Mott, and studied and observed extensively. He published The History and Pathology of Inebriety in 1854.

Turner imagined a place where the inebriate were safer as well as challenged in a way by learning trades or participating in activities. A place where patients were able to work out in the fields, kitchen, and/or workshop. A community like atmosphere, rather than restrictive one which nurtured and promoted good morality. He sought for funding from liquor taxes but due to Prohibition he was meet with quite the opposition. The timing was unfortunate and his initial plans for funding we not approved. This did not stop Turner though. Just as Dorothea Dix did, he pushed on with the same will power. In 1854, his plans were approved but with no funding. Rev. Henry W. Bellows, DD and Professor Roswell D. Hitchcock assisted Turner in overcoming this obstacle. Turner also constructed and distributed pamphlets, with an optional donation. His efforts were a success. He established the first Inebriate asylum of its kind in the country. The community was self sufficient. It had gardens, bowling alleys, fields to tend to, workshops, even rooms for sewing.

The buildings architect was Isaac G. Perry. He was taught by his father, Seneca Perry. Eventually together they earned a reputation which earned Perry an apprenticeship with Thomas R. Jackson. Jackson was a well know architect and his influence in Perry;s detail work can be seen. It was Perry’s first project however, and he did suffer some criticism surrounding his drawings. But obviously his fascination with Gothic style architecture and his time spent around Jackson had shown through. He went on to design several very distinctly Gothic style buildings in the Binghamton, New York area. He evolved as an architect and most of the buildings still stand today, almost blatantly obvious the same person must have designed them.

As I walked up, I personally felt overwhelmed by the history as well as the building itself. Previously not knowing as much as I do now about it’s history in younger days, I could not truly appreciate what I was seeing in the depth I do now. I walked down to where the nurses would have stayed, said a quiet thank you. Stared at the building and thought: wish I could have told Isaac it was quite impressive for his first project. Then finally stared at the front door imagining Joseph Edward Turner walking in for the day. I imagined a place where the patients were active, the community was self sufficient, and treatment was based on not just traditional methods, but also focused on restoring morality through mending the relationship between the patient and their passion. Through making them feel like part of a community, rather than an outsider. I felt honored just to be able to be there in person, in the same spot as all these people once were; the patients, the doctors, the nurses, and the architect.